Logging for square timber (white and red pine) began about 1830 when James Wadsworth obtained a timber licence to cut red pine from Round Lake to the source of the Bonnechere River. In 1846, 141,600 cubic metres of red and white pine were harvested and floated down the Madawaska, Bonnechere, and Petawawa Rivers. Peak of the square timber trade was reached in 1864 and the last square timber was cut near the Petawawa River north of Brûlé Lake in 1912. 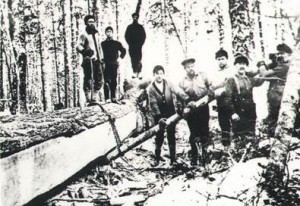 Major improvements in transportation resulted with the construction of the Canada Central Railway from Pembroke to Mattawa in 1881, and the Ottawa, Arnprior, and Parry Sound Railway (J. R. Booth) in 1897. In 1915 the Canadian Northern Railway was built across the northeast side of the unit (now CNR). These railroads greatly facilitated access to the unit and the sawmill industry benefited significantly. The last train to use the railroad was in November 1995 and the CNR rails have since been lifted.

Raw material for these early sawmills was still predominantly pine. In subsequent cuts, smaller pine and spruce were taken. By the 1930s, species other than pine were cut. Yellow birch was the first hardwood sought out. This evolution resulted from a variety of factors:

In the early 1950s, diameter limits were applied as a means to control the amount of timber harvested from specific areas.

These limits were usually 38 centimetres for yellow birch, maple, and hemlock and 46 centimetres on pine. Diameter limits were used in some areas up until the 1970s as the mechanism to carry out the selection or uniform shelterwood silvicultural systems.

Around 1950, individual trees in the former Petawawa Management Unit were first marked with paint to designate either their removal or retention. In the rest of the unit, diameter limits prevailed until the late 1960s and early 1970s when marking became the rule, to implement the selection system in the tolerant hardwoods or uniform shelterwood system in the pine working group. Presently, all stands are marked before cutting.

The dominant logging system in the 1970s and 1980s was: fell with chain saw; skid tree length by wheeled skidder to central landings; cut, sort, and pile the products and then load and haul using trailer type trucks. Although the above mentioned system is still used to a certain extent, the primary method now is to cut and skid to small landings, and haul treelengths to central landings outside the park where products are manufactured. This process allows for better recovery of the more valuable forest products, provides more flexibility in haul schedules and, more importantly, reduces both the amount of area required for landings in the bush and the quantity of machinery in the Park, and therefore, less noise.

The use of species and their quality has been evolving steadily. There are three apparent reasons for the changes: